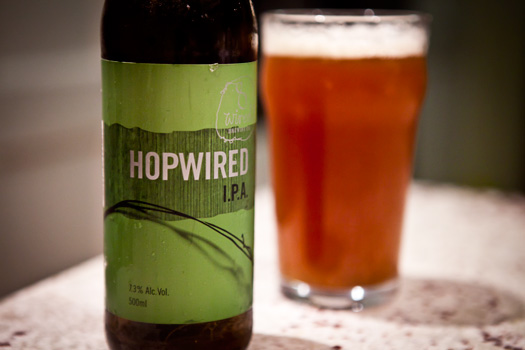 HopWired IPA - 8 Wired Brewing Co. - NZ - 7.3%
Brew: Given to me as a gift, I've been holding on to this bottle for a little while, but tonight was the night.
It's been a while since I last wrote a report, or took notes on a beer/brewery, so I had a quick read back through my trusty beer stained journal. Before starting to talk about or analyse a beer, it is important to take into consideration the beer before trying this beer, and also the food recently eaten. In this case: no beer prior; no food eaten.

From the moment the cap is rolled off the bottle, you can begin to smell the treat you're in for. Pouring a hazy* copper-brown colour, the colour isn't the notable aspect of the beer while pouring, it's still that gorgeous smell...

There's a huge initial hop hit, rolling into a sweet molasses-toffee malt aroma. *The haze in the beer is a good indication of dry-hopping (adding hops after the brewing process, while the beer is fermenting, purely for aroma).


"...the kiwi hops used in HopWired produce something more like a tropical punchbowl: Passion fruit, limes, oranges and Sauvignon Blanc grapes to name but a few."


Passion fruit and limes are definitely notable, but more overwhelming is the blackberry aroma, from the 2010 harvest Pacific Gem hops.

It is sweet and wonderfully malty, with the bitterness and alcohol cutting through to balance it out. There's a slight peppery attribute to the bitterness almost as if the beer was spiced. There's a great caramel-to-toffee flavour balance, and it wouldn't be a proper IPA without a little Crystal malt in there... which the biscuity ochre flavour tells me it is.